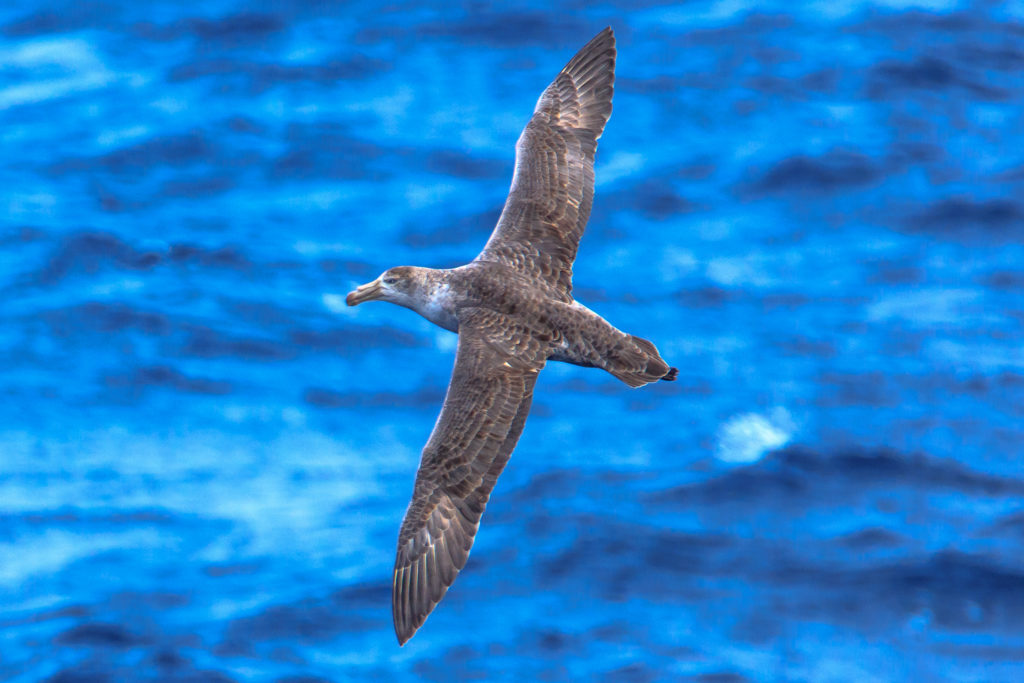 Whilst 35 species of bird can be found living south of the Antarctic Convergence, only 19 of these species actually breed in Antarctica.

Most notable among these are the Wandering albatross, cormorants, skuas, sheathbills and petrels, all viewable on most Antarctica cruises.

Because of the relative lack of snow-free nesting grounds, most of the Antarctica seabirds breed in very large concentrations.

In the warmer months of summer, the birds have an almost endless supply of food thanks to the sea-zooplankton, cephalopods and fish that lie in the nearby oceans.

Chicks generally grow quickly and start fending for themselves by the early winter period. During winter most Antarctica seabirds will migrate north in pack ice or out into the open sea where a number of species spend most of their lives.

Below we have provided information on every type of Antarctica seabird.

The Blue-eyed Shag, or ‘Imperial shag’ is found solely on the west side of the Antarctic Peninsula, the Scotia Arc, South Georgia and the south-west coast of South America.

It is the only species of cormorant to venture as far south as Antarctica. They are easily distinguishable by their bright blue eyes and a yellow lump on the base of their beak.

They tend to nest on cliff tops and catch fish by diving and catching their prey underwater. The cormorants will often fish in large packs to confuse shoals of fish in shallow water.

Cormorants are excellent divers and have been recorded diving over a 100 meters in depth! Unlike all other Antarctica seabirds, Blue eyed shags will maintain a nest year-round.

Their nesting sites are always on the sub-Antarctic islands where there is snow-free nesting ground.

Size and weight: Males are heavier than females and weigh roughly 2.5 kg. Typical length is 75 cm with a wingspan of just over a meter .

Feeding: Generally feed in inshore waters on fish. Will eat other marine life if the opportunity presents itself.

Breeding Season: October through to December. Females will usually lay 2 or 3 eggs. Incubation takes a month.

World Population: There are many sub-species which make estimating a world population very difficult.

Predators: Adults are not preyed upon. Eggs and chicks are often eaten by Antarctic Skuas.

Probably one of the most beautiful Antarctica seabirds, the Snow petrel is pure white with black eyes, beak and underdown.

Snow petrels do not migrate in the winter but, instead, live on the continent all year-round. Snow petrels have been recorded nesting over 400 miles inland on remote mountain tops where the rock punctures through the ice.

Size and weight: Fairly small birds weighing on average 350 grams. They have a typical body length of 30-40 cm and a wingspan of roughly 80 cm.

Breeding Season: Breeding season occurs in the last 3 months of the year.

World Population: There is an estimated 4 million Snow Petrels.

With a wingspan of over 2 meters, the Giant petrel is the largest of the petrel family.

Like the albatross, Giant petrels often struggle to take flight on flat ground or when there is little wind. Giant petrels are essentially scavengers and are usually found around a seal or whale carcass.

19th century sailors called Giant petrels ‘stinkers’ because of their habit of vomiting on anyone or anything that appeared to threaten them.

This cautionary reaction is actually very common among many bird species. Giant petrels make their nests from small stones and will often leave the nest if disturbed.

Generally Giant petrels are a brown colour, however, about 10% of the species turn out white.

Size and weight: The biggest of the Petrel family, Giant Petrels weigh 5 kg and often have a wingspan of over 2 meters.

Feeding: Giant petrels are mainly scavengers and will fest upon seal and penguins carcasses usually.

Breeding Season: Nests are laid towards the end of the year and chicks fledge around March.

Distribution: Circumpolar distribution. Most commonly seen in open water, however, their nesting sites are usually found on the sub-Antarctic islands such as the Falklands.

Because of the lovely pattern on their backs and wings, Cape petrels are often referred to as ‘Pintardos’ (Spanish for “painted ones”).

The pigeon sized birds will generally eat small fish and krill, however, if a carcass is lying around they will happily scavenge the remains.

Cape petrels tend to nest on sea cliffs in great flocks, finding little crevasses in which to nest.

The chicks resemble noting so much as a fluff ball when young. Cape petrels often live up to 20 years.

Size and weight: Cape petrels usually weigh around 400 grams with a body length of 40 cm and a wingspan of 85 cm.

Breeding Season: Nests are formed in November and the chicks usually fledge in March.

World Population: There are an estimated 2 million Cape petrels.

Distribution: During the breeding season they will stay within Antarctica and the sub-Antarctic islands. In the winter they can be found as far north as the equator.

These scavenging birds have been given many names over the years, the most popular possible being a ‘Mutts’.

Sheathbills will literally eat anything they can get their beaks on! They not only eat fish, krill and other plankton, but mammal carcasses, penguin eggs, penguin chicks and, occasionally, penguin faeces.

Sheathbills are the only Antarctica seabirds not to have webbed feet. They will often hop around on one foot in an attempt to stay warm.

Like most Antarctica seabirds, sheathbills normally migrate north during the colder winter months, although a few flocks have been known to stay.

Size and weight: Sheathbills weigh between 450 and 770 grams. Their typical length is roughly 37 cm with a wingspan between 70 – 80 cm.

Feeding: Sheathbills are opportunistic feeders and will eat almost anything.

Breeding Season: Nests are made towards the end of the year and chick generally fledge in March.

Members of the gull family, Antarctic skuas are fiercely predatory birds and will attack anyone of thing that ventures too close to their nest.

This trait has earn skuas the nickname ‘raptor of the south’. For most of the year Antarctic skuas roam the ocean in search of krill until breeding season when they find a rocky area in which to nest.

During this period Antarctic skuas will take up residence near other rookeries to raid the eggs and small chicks for food.

Antarctic skuas have been seen as far south as the South Pole and are a common sight on Antarctica cruises.

Size and weight: Usually weighing well over a kilogram, males are actually slightly smaller than females generally. Skuas have an average length of 50 cm and a wingspan of 130 – 140 cm.

Breeding Season: Skuas lay their eggs between November and January. Chick take just under a month to incubate. A pair will often lay two eggs, however, only 1 usually survives.

Distribution: Found throughout Antarctica during the summer months. In winter skuas will often reach as far north as Alaska!

Without doubt the most impressive of the Antarctica seabirds and a favourite among Antarctica cruise goers.

The Wandering albatross has the largest wingspan of any bird in the world with an average of 3.1 meters! As their name suggests, Wandering albatrosses will stay at sea up to a month in search of food, gliding in the breeze without much more effort than sitting still.

During these fishing trips Wandering albatrosses will often cover in excess of 10,000 km. They are remarkable birds and will often cover a 1,000 km in one morning to get food for their young.

Chicks weigh 12 kg when they leave the nest. When this happens, the chick does not return for 5 – 7 years. When the young finally do return it’s to the exact same island in which they were raised.

Fully grown albatrosses often struggle to take flight due to their size and will often take a run up down a slope to get the speed they need to become air born.

Size and weight: With an average wingspan of just over 3 meters, the albatross has the largest wingspan of any bird in the world. Its body length is typically between 105 and 135 cm and its average weight is between 6 and 12 kg!

Breeding Season: Nest are made in November and chicks usually hatch in December. A pair of Albatrosses will normally have one chick every two years.

Distribution: Usually found in the sub-Antarctic area. 75% of the world’s albatross population is found in three places – South Georgia (25%), Crozet and Kerguelan Islands (10%) and the Prince Edwards Islands (40%).

Conservation Status: Conservation status of ‘vulnerable’ as many of the populations are in long term decline.

If you would like to know more about Antarctica seabirds, please leave a comment below and we will endeavor to get back to you within 24 hours! Alternatively, please see our FAQ page here. If you would like to get a cruise quote, please use this form.